Posted. Heidi Spang explained interesting things about Roman culture and way of life, the use of herbs and spices… And that in the Roman wine press Piesport from the 3rd century AD. …

A very successful event in Hamburg in February in the studio of SAVOIR VIVRE!

The Hamburg wine dinners were enthusiastic, the smell of home-baked breaded bread spilled through the rooms, the explanations during the Power Point presentation with Heidi alternated with cozy loosening and sampling of herbs and Roman dishes with delicious Schneider wines. In tandem, Heidi and Heinz lead through the Roman wine evening. In the end, instead of a warm hand print, there was a warm slate stone, the minerals could be smelled, rediscovered in the wines and finally understand why the vines here at the Moselle so beautifully warm. A hearty thank you to the editor-in-chief Mr. Lietz and his very friendly and friendly team! The article will appear in the next SAVOIR VIVRE! 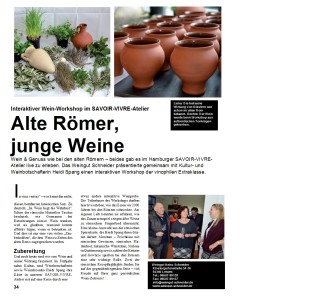